skip to main | skip to sidebar

Video Interview With Stephen Meyer on Signature in the Cell

Is there evidence of intelligence in DNA? Can Darwinian Evolution account for information? Listen to this interview with one of the leaders of the ID movement.

About the Book: "Drawing on data from many scientific fields, Stephen Meyer formulates a rigorous argument employing the same method of inferential reasoning that Darwin used. In a thrilling narrative with elements of a detective story as well as a personal quest for truth, Meyer illuminates the mystery that surrounds the origins of DNA. He demonstrates that previous scientific efforts to explain the origins of biological information have all failed, and argues convincingly for intelligent design as the best explanation of life’s beginning. In final chapters, he defends ID theory against a range of objections and shows how intelligent design offers fruitful approaches for future scientific research."
Posted by blog admin at 12:11 AM No comments:

This is a question that will only get more attention in the days ahead. Here is a helpful post by apologist Sean McDowell:

"The question is whether or not Darwinian evolution can be wedded with orthodox Christianity without doing damage to either one. For the past couple years I’ve read the main works of theistic evolutionists such as Francis Collins (The Language of God), Kenneth Miller (Only A Theory), Denis Alexander (Creation or Evolution: Do We Have to Choose?), and Karl Giberson (Saving Darwin). They all seem to have a common goal: mold Christian theology to fit neo-Darwinian evolution. In other words, strip Christianity down to its bare bones so it can be consistent with evolution. After reading these works one thing become clear: theology can be molded and adapted to accommodate evolutionary theory, but not vice versa. Should Christians Embrace Evolution? raises both theological and scientific objections to theistic evolution." Read more

Here is another case of academic freedom being squelched:

"Last week we reported on a discrimination lawsuit filed on behalf of JPL employee David Coppedge. Over the weekend the San Gabriel Valley Tribune ran a lengthy story reporting on the suit.

After Coppedge discussed intelligent design with JPL scientists, his supervisors told him to stop discussing religion. Last April Coppedge's bosses demoted him. Coppedge had been a leader on the system administrator team for the Cassini mission, according to the suit.

The paper also reports that after being ordered by his superiors at JPL to stop talking about intelligent design, Coppedge did just that. Even more interesting is this:

Earlier this month Coppedge claims he met with his supervisors, who told him that the written warning was inappropriate and it would be removed from his file. The suit calls this is "an admission of liability."


This concise guide is filled with illustrations, sidebars, and memorizable steps to help Christians stand their ground and defend their faith with reason and precision. In his engaging style, Dr. Craig offers four arguments for God’s existence, defends the historicity of Jesus’ personal claims and resurrection, addresses the problem of suffering, and shows why religious relativism doesn’t work. Along the way, he shares his story of following God’s call in his own life.

This one-stop, how-to-defend-your-faith manual will equip Christians to advance faith conversations deliberately, applying straightforward, cool-headed arguments. They will discover not just what they believe, but why they believe—and how being on guard with the truth has the power to change lives forever.

From the Back Cover

Do you worry that someone will ask you a question about your faith that you can’t answer?
Have you tried to learn how to defend your faith but gotten lost in confusing language and theology?

Do you struggle with times of spiritual doubt yourself?

This concise training manual by renowned scholar William Lane Craig is filled with illustrations, sidebars, and memorizable steps to help you stand your ground and defend your faith with reason and precision. In his engaging style, Dr. Craig offers four arguments for God’s existence, defends the historicity of Jesus’ personal claims and resurrection, addresses the problem of suffering, and shows why religious relativism doesn’t work. Along the way, he shares his own story of following God’s call.

This one-stop, how-to-defend-your-faith manual will equip you to advance faith conversations deliberately, applying straightforward, cool-headed arguments. You will discover not just what you believe, but why you believe—and how being on guard with the truth has the power to change lives forever.

Signature in the Cell: DNA and the Evidence for Intelligent Design Discussion with Medved, Meyer, Woodward & Berlinski 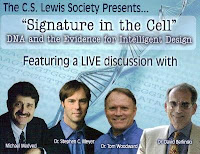 Response to Darrel Falk’s Review of Signature in the Cell By Stephen C. Meyer

"In 1985, I attended a conference that brought a fascinating problem in origin-of-life biology to my attention—the problem of explaining how the information necessary to produce the first living cell arose. At the time, I was working as a geophysicist doing digital signal processing, a form of information analysis and technology. A year later, I enrolled in graduate school at the University of Cambridge, where I eventually completed a Ph.D. in the philosophy of science after doing interdisciplinary research on the scientific and methodological issues in origin-of-life biology. In the ensuing years, I continued to study the problem of the origin of life and have authored peer-reviewed and peer-edited scientific articles on the topic of biological origins, as well as co-authoring a peer-reviewed biology textbook. Last year, after having researched the subject for more than two decades, I published Signature in the Cell, which provides an extensive evaluation of the principal competing theories of the origin of biological information and the related question of the origin of life. Since its completion, the book has been endorsed by prominent scientists including Philip Skell, a member of the National Academy of Sciences; Scott Turner, an evolutionary biologist at the State University of New York; and Professor Norman Nevin, one of Britain’s leading geneticists.

Nevertheless, in his recent review on the Biologos website, Prof. Darrel Falk characterizes me as merely a well-meaning, but ultimately unqualified, philosopher and religious believer who lacks the scientific expertise to evaluate origin-of-life research and who, in any case, has overlooked the promise of recent pre-biotic simulation experiments. On the basis of two such experiments, Falk suggests I have jumped prematurely to the conclusion that pre-biotic chemistry cannot account for the origin of life. Yet neither of the scientific experiments he cites provides evidence that refutes the argument of my book or solves the central mystery that it addresses. Indeed, both experiments actually reinforce—if inadvertently—the main argument of Signature in the Cell.

The central argument of my book is that intelligent design—the activity of a conscious and rational deliberative agent—best explains the origin of the information necessary to produce the first living cell. I argue this because of two things that we know from our uniform and repeated experience, which following Charles Darwin I take to be the basis of all scientific reasoning about the past. First, intelligent agents have demonstrated the capacity to produce large amounts of functionally specified information (especially in a digital form). Second, no undirected chemical process has demonstrated this power. Hence, intelligent design provides the best—most causally adequate—explanation for the origin of the information necessary to produce the first life from simpler non-living chemicals. In other words, intelligent design is the only explanation that cites a cause known to have the capacity to produce the key effect in question.

Nowhere in his review does Falk refute this claim or provide another explanation for the origin of biological information. In order to do so Falk would need to show that some undirected material cause has demonstrated the power to produce functional biological information apart from the guidance or activity a designing mind. Neither Falk, nor anyone working in origin-of-life biology, has succeeded in doing this. Thus, Falk opts instead to make a mainly personal and procedural argument against my book by dismissing me as unqualified and insisting that it is “premature” to draw any negative conclusions about the adequacy of undirected chemical processes.

To support his claim that I rushed to judgment, Falk first cites a scientific study published last spring after my book was in press. The paper, authored by University of Manchester chemist John Sutherland and two colleagues, does partially address one of the many outstanding difficulties associated the RNA world, the most popular current theory about the origin of the first life.

Starting with a 3-carbon sugar (D-gylceraldehyde), and another molecule called 2-aminooxazole, Sutherland successfully synthesized a 5-carbon sugar in association with a base and a phosphate group. In other words, he produced a ribonucleotide. The scientific press justifiably heralded this as a breakthrough in pre-biotic chemistry because previously chemists had thought (as I noted in my book) that the conditions under which ribose and bases could be synthesized were starkly incompatible with each other.

Nevertheless, Sutherland’s work does not refute the central argument of my book (More)
Posted by blog admin at 3:38 PM No comments:

The C.S. Lewis Society Presents - Signature in the Cell: DNA and the Evidence for Intelligent Design

at The A La Carte Pavilion

Posted by blog admin at 4:01 PM No comments: